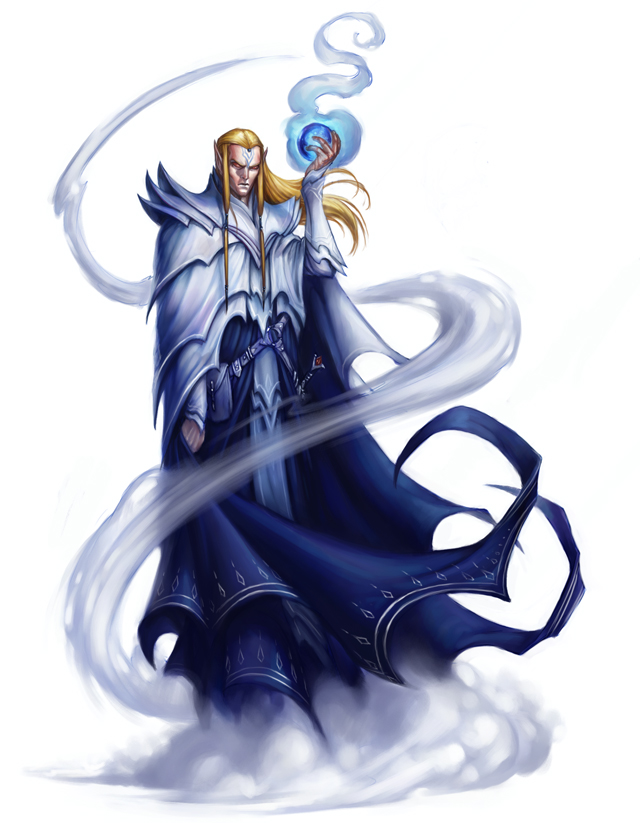 Average Height: 5´ 5˝–6´ 1˝
Average Weight: 130–180 lb.
Ability Scores: +2 Intelligence +2 Dexterity or Charisma
Size: Medium
Speed: 6 squares
Vision: Low-light
Languages: Common, Elven
Skill Bonuses: +2 Arcana, +2 History
Eladrin Education: You are trained in one additional skill of your choice.
Eladrin Weapon Proficiency: You are proficient with the longsword.
Fey Origin: Your ancestors were native to the Feywild, so you are considered a fey creature for the purpose of effects that relate to creature origin.
Fey Step: You can use fey step as an encounter power.
Trance: Rather than sleep, you enter a meditative state known as trance. You need to spend 4 hours in this state to gain the same benefits other races gain from taking a 6-hour extended rest. While in a trance, you are fully aware of your surroundings and notice approaching enemies and other events as normal.

Fey Step – Eladrin Racial Power
You interpret your fortune or failure as the will of the gods, and carry it through.
Encounter
Move Action – Personal
Effect: You teleport up to 5 squares.

In many realms of the Prime, the eladrin are a race in decline, overwhelmed by rising nations of orcs, goblins, or humans. Some eladrin return to the Feywild to nurse their wounds, but other eladrin nations are too far gone to ever recover. Such displaced peoples cross the waters of the Prime one last time, sailing away from the shores Men and on towards their final resting place: the Astral Sea.

Here, the eladrin rebuild one last time, creating beautiful cities for their dwindling populations. One by one, the twilight generation of eladrin ascend into the starry realms of Corellon, leaving behind ghost cities and elf-homes. Throughout the Astral Sea, the discovery of an elf-home is a prized opportunity for treasure, knowledge, and other ancient secrets. But adventurers beware—no matter how dusty and decrepit such islands appear, very few are as deserted as they seem.