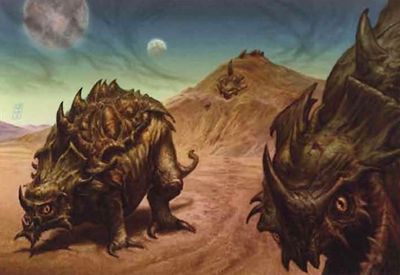 The spiny baazrag are two-foot long reptiles with spines and plates covering their bodies. Native to the Prime world of Athas, they were carried to the rest of the universe by a curious spelljammer ship, and their ability to survive harsh environments and cling to the sides of ships have allowed the monsters to spread through the Astral sea anywhere life is hostile, but survivable.

Baazrags are biologically omnivorous, but prefer to eat animals—a baazrag’s typical diet includes small vermin, insects, and spiders. Baazrag avoid conflict with predators, but are dangerous if ignored—a baazrag’s bite is venomous, and they have been known to attack sleeping or otherwise helpless prey and let their poison kill a victim slowly over the course of days. Baazrags breed like rats, and young adult baazrags are servile to their mothers for a period of two to six weeks before retreating to a solitary lifestyle. A baazrag broodmother, if properly cared for by her children, will grow to the size of a milk cow, and combined with her children, will actively hunt and kill other beasts like a pack of lions. It takes five litters for a baazrag mother’s hormones to develop to the point where she becomes a broodmother; most wild baazrag are killed well before that time.