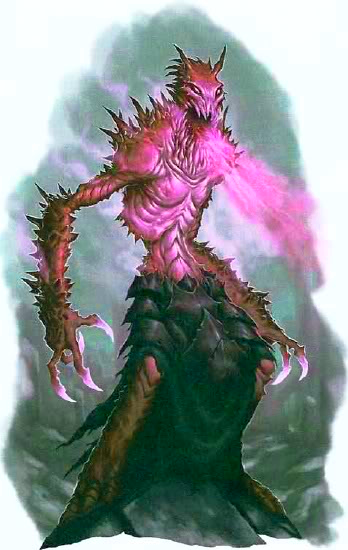 “Captain” Dahallas Kruger led the largest camp of Scavengers on Emer Aget. The good captain has organized his followers into a tight-run squad of soldiers, with hoo-rah morale and a pack-like mentality. Dahallas saw himself as a peerless tactician, both on the field and in parley. Indeed, Dahallas’ skill at swordplay was not open to debate. However, he was nothing more than a snake when it comes to diplomacy, promising everything to everyone as long as it can get him what he wanted. Dahallas even worked in secret with the cult below the island, trading them worthless recruits and captives in exchange for food and other goods.

In the end, Kruger’s parleys with the Cult of Many Legs cost him everything. When the party attacked the cult, and Phrasmin found his champions wanting in the skills needed to slay the invaders, he decided Kruger was a suitable replacement. Dahallas was captured by the cult, and transformed into a shrieking, demonic phantom. The transformed Kruger was forced to defend the cult’s base at the Heart of Shi Luu, where he was finally slain. As plague demons surged over the surface of Emer Aget, his followers were slain, destroying the last of Kruger’s legacy.