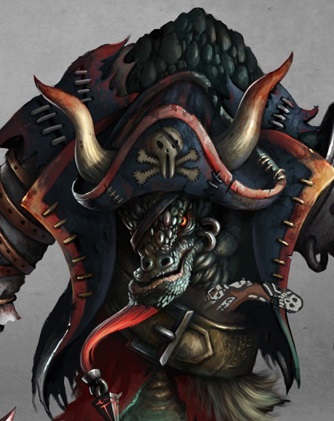 “Captain” Kixx the Klaw is the oldest, largest, and meanest of the kroola that used to live on Emer Agat. He’s one of the few kroola that remembers the world outside of the island, and often reenforces his position by spinning tales about the Astral Sea to the younger generation. For this, Kixx is not only followed, but revered as “Kap’n” by most of the other kroola—with the exception of the twins, Kaven and Karen.

During the attack of Phrasmin’s plague demons, Kixx went toe-to-toe with Palego Vortessimi for control of Cimmeron’s salvaged galley, with both leaders losing out to the adventurers. Now, Kixx serves aboard the KKK Shaziiir as a boatswain for the crew, making use of his great size and strength to keep the unruly kroola at task.