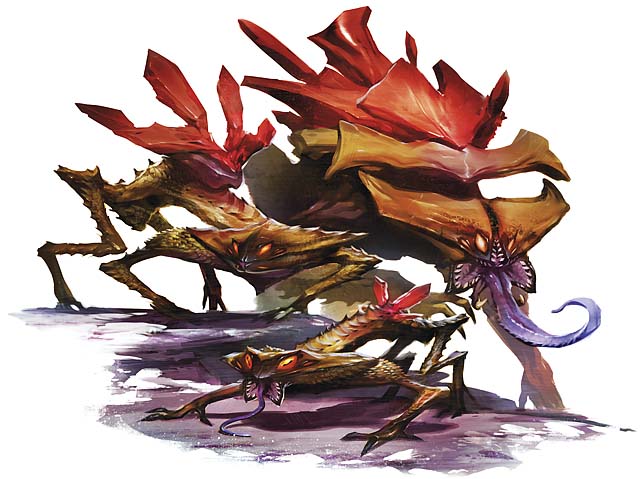 Only years ago, the Prime Material plane was besieged by a demon lord called the Voidharrow, in the form of a terrifying Abyssal Plague. This plague infused the sickly and weak with the flesh-warping nature of the Abyss, forging an army of demons frolm innocent townsfolk and hapless wildlife. The Voidharrow was eventually defeated, but colonies of its plague demons still nest in the bowels of the Material Plane and the Elemental Chaos.

Most “plague demons” are in fact humanoids and beasts who have been exposed to the Abyssal Plague. Their original bodies have been warped beyond recognition, the cysts and boils of disease transforming into alien limbs and sulfurous crystalline scales. Unlike other demons, plague demons form complex societies of dull-minded mutants under the direction of a more powerful demon or spellcaster. Naturally, plague demons are capable of spreading their foul disease—usually by bite or some other natural attack. Over time, plague demons continue to suffer the effects of the Abyssal Plague, becoming larger and more deadly with each mutation.