Wardens of extraplanar gateways, made from the celestial demesnes. 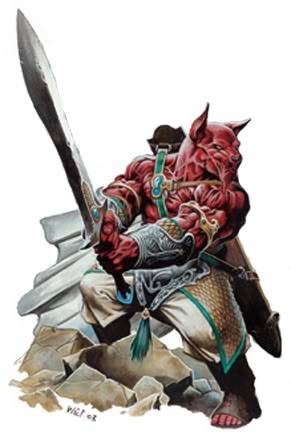 Average Height: 6´ 2˝–6´ 8˝
Average Weight: 210–315 lb.
Ability Scores: +2 Constitution, +2 Charisma or Wisdom
Size: Medium
Speed: 6 squares
Vision: Low-light vision
Languages: Common, choice of one other
Skill Bonuses: +2 Perception, +2 Religion
Astral Serenity: While you are not bloodied, you gain a +2 bonus to saving throws against effects that deal ongoing damage.
Immortal Origin: Your ancestors were native to the Astral Sea, so you are considered an immortal creature for the purpose of effects that relate to creature origin.
Warp Evasion: After you are unwillingly pulled, pushed, slid, or teleported by an effect, you can teleport to any adjacent unoccupied square as an immediate reaction.
Anchorage: You have the anchorage power.

After the appearance of the primal spirits on the Material Plane, the gods created the rocca, or portal hounds, to safeguard the planar gateways between the Astral Sea and the Prime from possible retaliation by the spirits. The promised invasion never came, but the rocca are nothing if not loyal to their ancient charge. These archons were crafted from the earth of a dozen disparate demesnes. Their mixed origins create a feeling of wanderlust that is only sated within the energy field of extraplanar portals, which are likewise the joining of distant lands. Unlike other races, the rocca do not vie to expand their borders; their innate connection to conjuration magic makes the concept of linear territory confusing and inefficient. When rocca desire a location, they build a new city over the spot, and connect it to their other communities through extradimensional causeways and circles. Rocca are natural wardens for places of travel and trade, and are just as obvious as targets for pirates, invaders, and hungry ur-gods. But at least things stay busy.